The start of a new month has brought renewed fervor from the cryptocurrency market as Bitcoin's (BTC) price steadily climbed from a low of $43,537 on Feb. 28 to a high of $49,200 during Monday's early trading hours.

As traders get excited about positive moves in the market and look to reenter positions, the increasing use of decentralized finance (DeFi) continues to drive fees on the Ethereum network higher, shining the spotlight on the top layer-two protocols that offer working solutions.

Three protocols that have emerged as top layer-two contenders with working platforms are Polygon, xDai and Loopring. Each offers its own unique layer-two approaches to helping ease high traffic on the Ethereum network.

Polygon, previously known as Matic, officially launched as a layer-two aggregator for Ethereum on Feb. 9 as a way to offer an interoperability protocol for the network.

Since excitement for the rebrand began, MATIC's price has increased by 400% from $0.05 to an all-time high of $0.245 on March 1. Growing excitement for the Aavegotchi mainnet launch on March 2 has also brought a boost of attention and trading volume to MATIC. 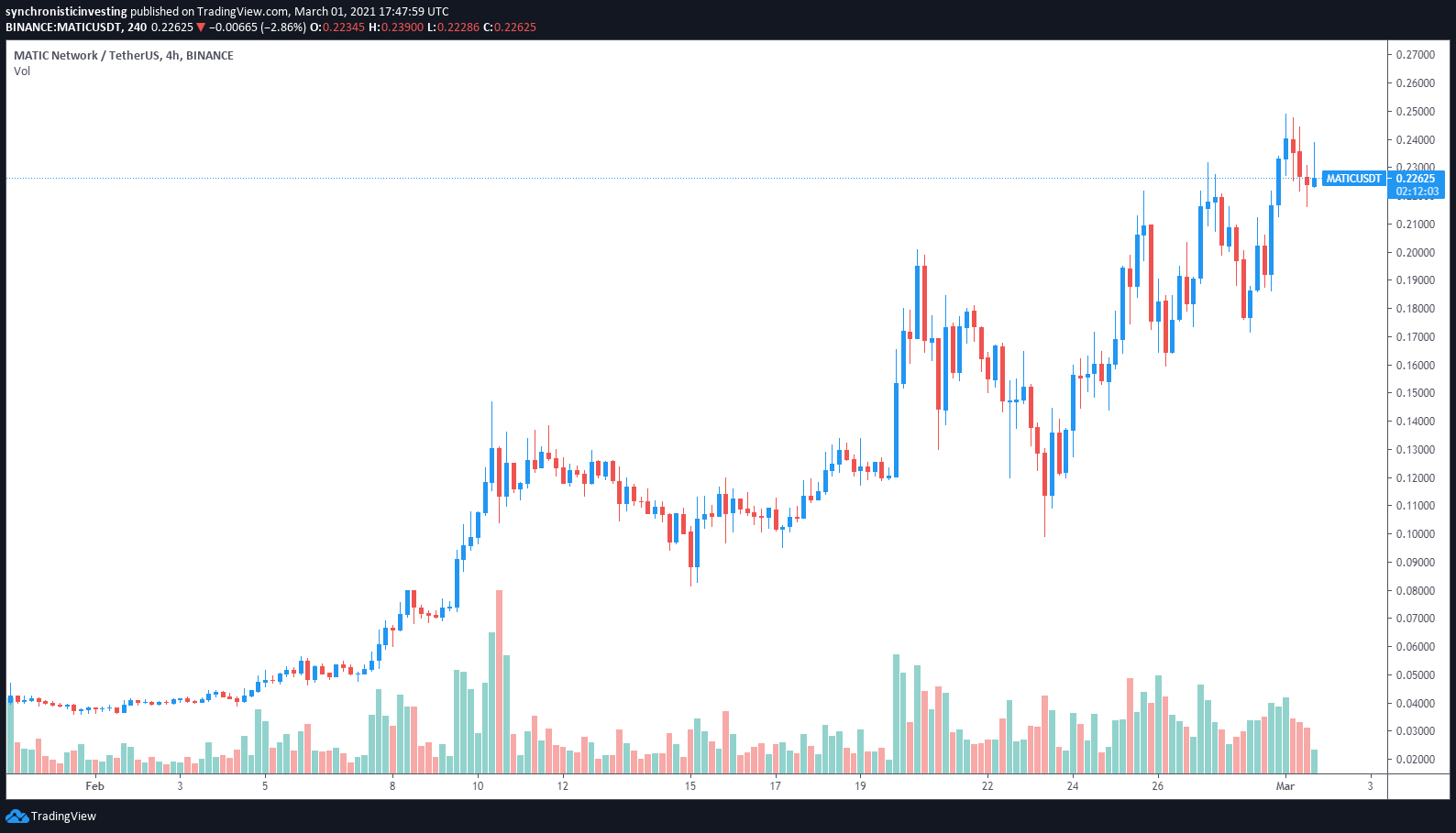 Aavegotchi was one of the first projects to bridge over to the Polygon network, and it will likely be joined by other projects if its mainnet launch on the network goes smoothly.

MATIC also received a boost on Feb. 26 when it was announced that gaming giant Atari would be integrating Polygon in order to “bring their NFT & token products to Layer 2,” along with the launch of “the first EOS-Polygon cross-chain bridge,” which was done in partnership with pNetwork.

xDai is another layer-two solution that has caught the attention of investors over the past few weeks. The xDai chain is a stable payment blockchain created by the POA Network, an Ethereum open-source public sidechain that offers a framework for smart contracts.

The blockchain's STAKE token is designed to be a multichain staking token that validators and delegators offer as collateral in order to participate in the consensus mechanism and receive staking incentives for block production. The goal of the xDai platform is to offer fast and inexpensive transactions on the Ethereum network.

Since trading at a low of $7.50 on Jan. 2, STAKE price increased 500% to a new all-time high of $43 on Feb. 21 before falling under pressure alongside the wider cryptocurrency market. 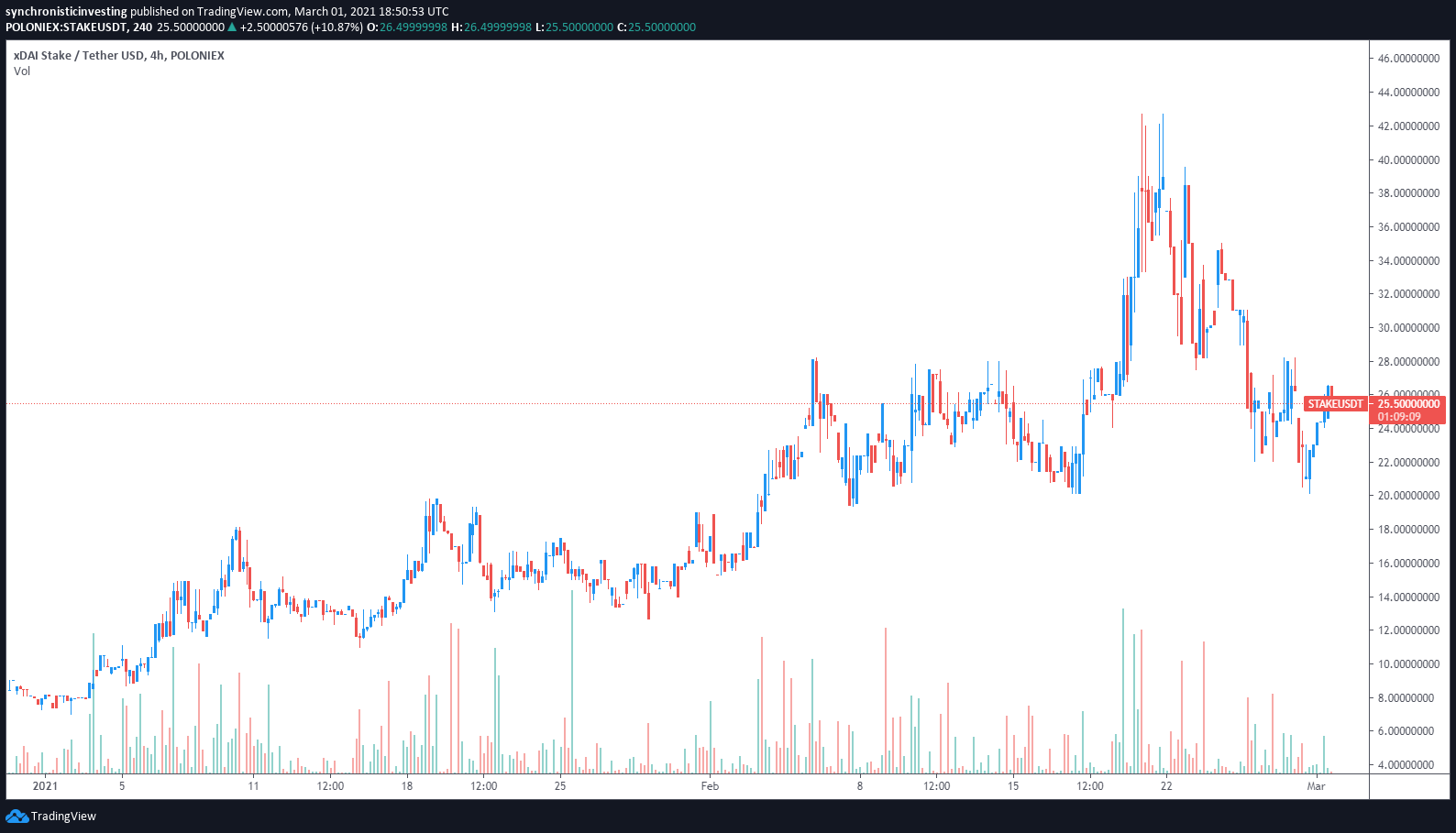 A scroll through the project’s Twitter feed shows multiple recent partnerships and integration announcements that have helped propel STAKE higher in recent weeks.

Notable mentions include an integration with the Binance Smart Chain (BSC) that allows users to move funds from Binance to xDai using a BSC-to-xDai bridge along with the announced migration of the up-and-coming Bao Finance to the xDai network.

Loopring is a layer-two solution that specifically focuses on the creation of decentralized cryptocurrency exchanges (DEXes).

One of the major sources of congestion on the Ethereum network is the ever-growing activity of popular DEXes like Uniswap and SushiSwap.  A separate sidechain made specifically for exchange trading could help alleviate congestion on the network, and this is what Loopring aspires to provide. 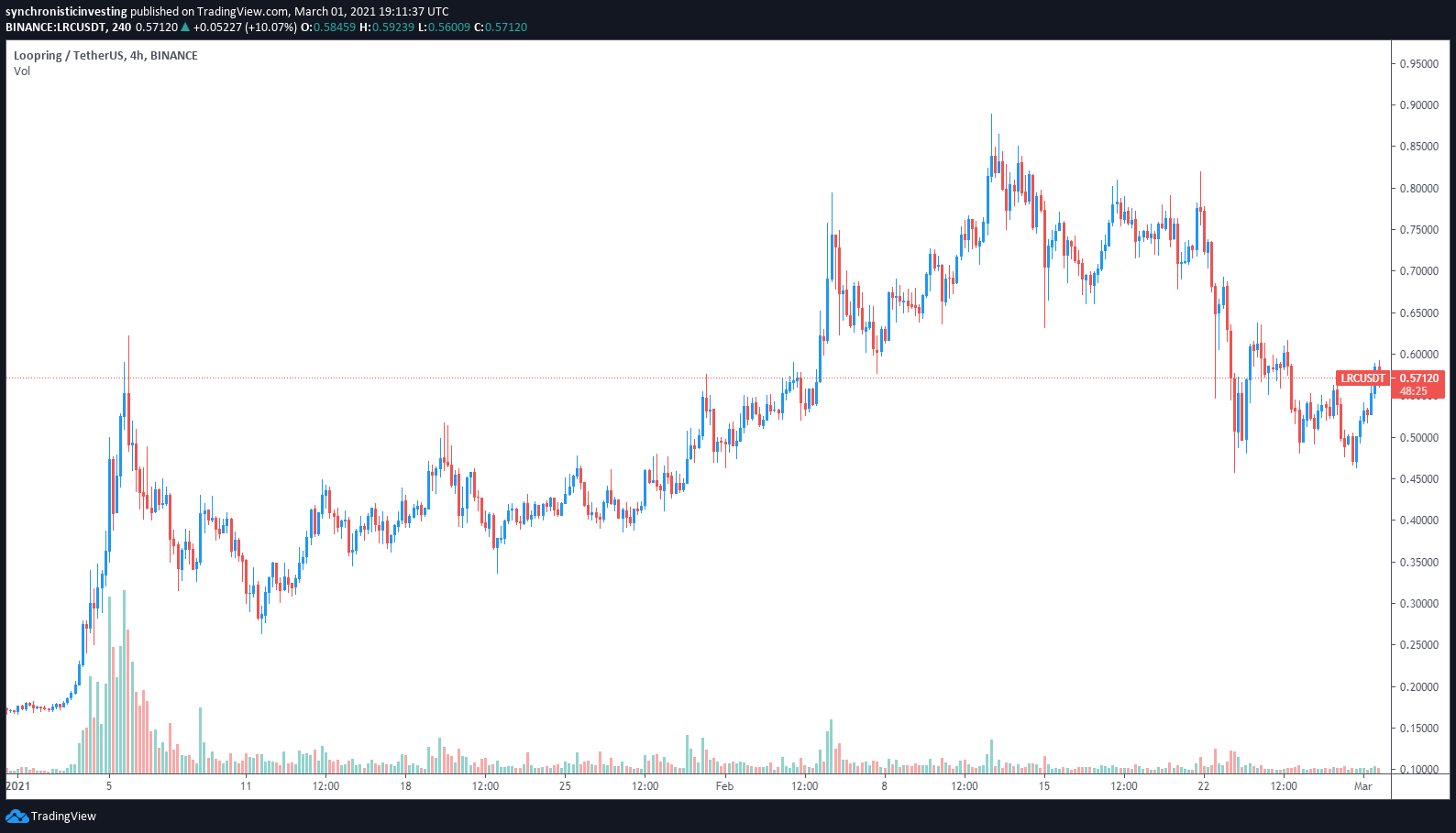 After falling to a low of $0.46 on Feb. 28, LRC price rallied 30% after it was announced that the Loopring exchange added multiple Wrapped Bitcoin (WBTC)/stablecoin pairs, offering “6 new ways to trade WBTC on Ethereum L2.”

VORTECS™ data from Cointelegraph Markets Pro began to detect a bullish outlook for LRC on Feb. 28, prior to the recent price rise.

The VORTECS™ score, exclusive to Cointelegraph, is an algorithmic comparison of historic and current market conditions derived from a combination of data points including market sentiment, trading volume, recent price movements and Twitter activity. 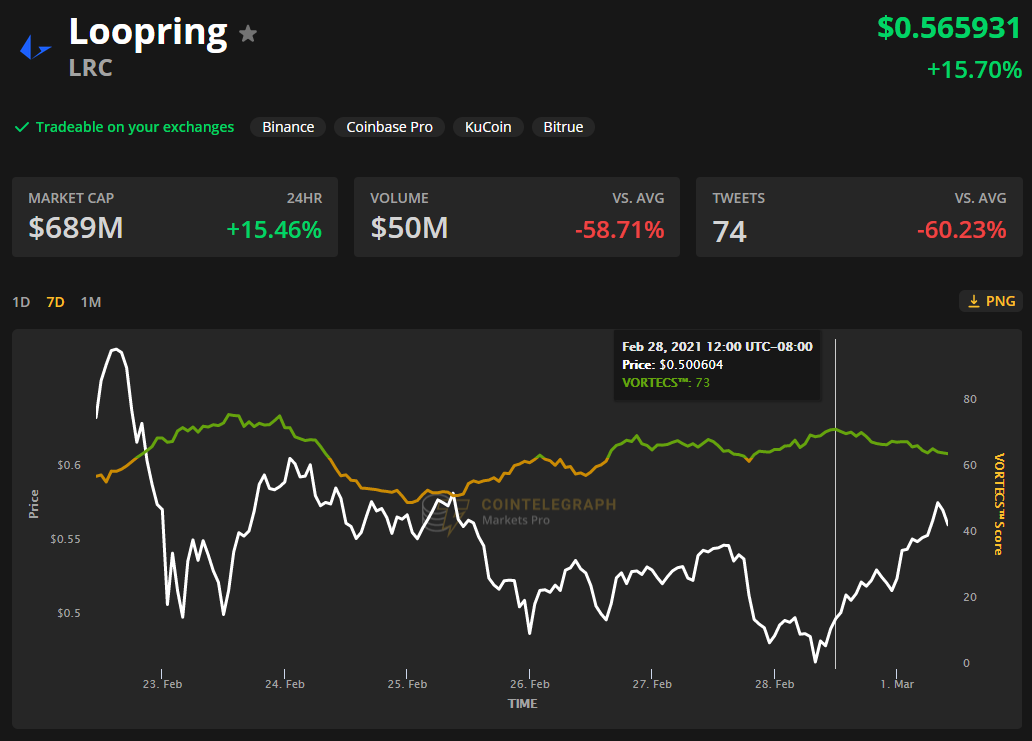 Continued increases in the price of Ether (ETH), which rose back above $1,500 on March 1, will only exacerbate the pain felt by traders attempting to use popular DeFi protocols on the network.

The amount of gas needed to conduct basic transactions, along with the price of these fees, will continue to drive users to trial the alternatives be offered by layer-two solutions, and Polygon, xDai and Loopring are three protocols well positioned to capitalize on this trend.