No major euphoria-worthy moments happened this week — the ecosystem is still cooling off.nbsp;

I think the biggest sign of that is Uniswap’s trading volume. After hitting a peak of slightly less than $1 billion in daily volume in early September, those numbers steadily deflated. 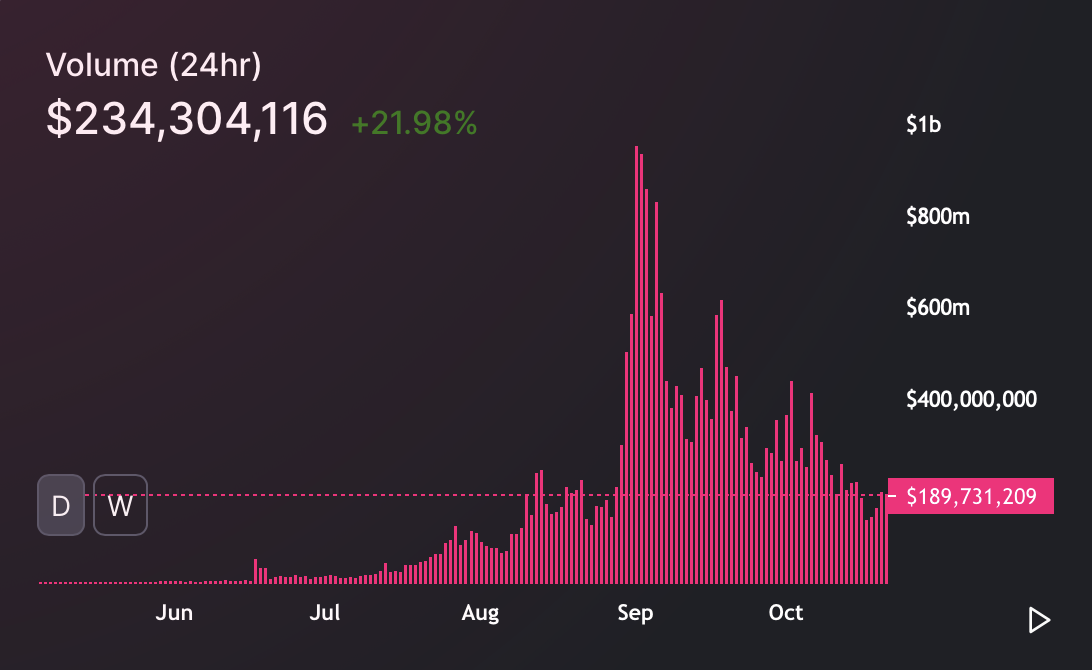 But despite the downtrend, I think even the current level is still well beyond the wildest imagination of a DeFi fan in 2019. For reference, those figures are roughly on par with Bitstamp or Bitfinex (even though as I write this, their volume seems to have skyrocketed with the PayPal news).

This analysis of a survey on centralized exchange operators captured my attention though. What they say is that they don’t fear DeFi, but the article’s author posits that their actions betray their true beliefs. Given the plethora of “CeDeFi” platforms, we can definitely see a degree of co-opting done by powerful exchanges.

So should CeFi representatives be afraid of DeFi?

Well, I think they should be concerned but not afraid. DeFi as it exists now in many ways repeats what these exchanges already do. Uniswap is obvious, but then you have stuff like Compound and Aave that are mostly used, as I and many others believe, for leveraged trading.

That’s just everything you can do with an over-collateralized loan backed by an ephemeral asset (as opposed to a house or car). Maybe some rich crypto whales could use these loans for a more tax-efficient use of their money without losing their crypto position, but even that is still a form of leverage — you lose more when it goes down compared to just selling the portion you need to pay for expenses.

And of course, you can do all these things with CeFi, it’s just that you may need to pass through pesky KYC to do so. So in that sense, DeFi will always have an advantage — it’s a more immediate and uncensorable user experience, provided you’ve set up your wallet.

There are also issues related to fundamental design. AMMs like Uniswap or Curve will never really replace order book exchanges because they can’t price things “correctly” on their own. Of course, the order book exchange doesn’t have to be centralized, but we’re still a bit far off from mass adoption of platforms like Serum or Loopring.

I talked about this in-depth in my feature on DEXs, and I share the overall judgement expressed by Loopring’s Matthew Finestone: centralized exchanges will definitely remain for those who want full regulation, for example institutions, plus as gateways for fiat.

Such a scenario leaves a sizable piece of the pie for centralized venues.

The Dharma-led governance vote to reduce the voting quorum on Uniswap failed… because it didn’t reach quorum.

The weirdest thing about this story is that any reasonable person would look at it and say, “but it did reach quorum!”

The final tally is 39,596,759 UNI for vs. 696,857 UNI against, which does add up to slightly more than the 40 million required. Except that Uniswap (and Compound) for some reason considers “quorum” as “how many people voted yes.” The generally accepted definition takes all votes into consideration, no matter which way they were cast.

So why did this failure occur? Is it a coincidence that the vote would have passed under the standard definition of a quorum?

I have strong doubts about that. Even some in the community suggest that people really thought it would have passed. The logic is that once you reach the threshold there’s no point to add more votes since it costs gas and work to rally voters.

Maybe the vote really whiffed by a hair because it couldn’t gather the community support it needed.

But I wouldn’t be surprised to learn that someone at Dharma just messed this up.

Another day, another FOMO into Cronje’s tests

At this point I’m not even sure what to say anymore, but Yearn Finance founder Andre Cronje was once again “the cause” of some people losing money in a pump amp; dump scheme. (Hint: he really wasn’t.)

This time it was Keep3r, a sort of freelance platform for developer operations, a generic term for maintaining some technical infrastructure. Things like calling a smart contract or doing some tricky thing with smart contract deployment.

Its token, KPR, was once again listed on Uniswap by people who discovered the contract. I know of one guy who joined in the fun, apparently making money while doing so — obviously at the expense of others not so lucky. This time the scale paled in comparison to stuff like Eminence, as only a few thousand dollars in volume was registered.

Obviously, this wasn’t even the final version of the project for that day. That’s how Cronje tests his software, by iterating through code on mainnet. There are dozens of Yearns or YFI token contracts on Ethereum, as he revealed earlier.

As I mentioned last week, this really has nothing to do with Cronje. There’s just no way he could disclaim harder that people shouldn’t throw their money into these contracts, and the losses are just due to the games these people play on Uniswap.

There was a literal Ponzi smart contract that some guy released once, and people did put money into it. That’s just crypto I guess.

Bancor released the V2.1 of its exchange, which basically discards one of the key components of the earlier release. It used to be that the exchange would read market prices via oracles so that liquidity providers wouldn’t suffer impermanent loss (also called divergence loss since you lose money when two assets in a pool diverge in price).

It turned out that it didn’t work. Oracles are too slow to update and are front-runnable, so Bancor has now embraced the harsh reality: you can’t fix impermanent loss.

AMM developers seem to be reaching the conclusion that there is no general solution to this issue — there is always some trade-off or drawback.

In that sense, there is a perfectly functional way of reducing impermanent loss for Uniswap liquidity providers. Basically, the idea is that by providing liquidity they have a “short volatility” position — they lose if volatility is high, and they make more money from fees if volatility stays low.

Worth mentioning that I’m talking about the concept of volatility as usually seen in option markets, which consists of decisive moves in a certain direction, as opposed to what most people associate with the term, which is how “jittery” the price is.

So you can hedge impermanent loss by simply opening a “long volatility” position: buy an appropriate amount of both call and put options and roll them over as they expire.

You’ll pay a premium, but your impermanent loss should be fully covered.

Maybe I’ve lost you there with this options talk. But the good thing is that Bancor introduced a fairly similar mechanism of impermanent loss insurance. The cost is borne by the BNT holders through some fancy mint and burn mechanics, so liquidity providers on certain pairs can feel safe that they’ll always make money if they hold the pool token for long enough.

I expect more and more AMMs will start to follow a similar approach where the costs of impermanent loss are simply shifted somewhere else. Indeed, I strongly suspect that the upcoming Uniswap V3 will feature something like this.