The butterfly effect: Why DeFi will force BTC to break its 21M supply ceiling

Moving forward, this trend will pose severe challenges for Bitcoin’s network security, especially as BTC continues to phase out block rewards, leaving miners increasingly unable to generate income. Prior to the explosion of DeFi, BTC supporters were confident in their ability to generate income through the platform’s transaction fees — yet this appears to no longer be the case. Moving forward, I’d like to explore the future of BTC and its implications for the blockchain sector.

As blockchain adoption enters a new phase, decentralized finance is facilitating an irreversible shift away from centralized finance as users embrace self-custody. Since liquidity farming took off in July 2020, mainstream crypto assets such as Ether (ETH) have increasingly shifted toward decentralized platforms over the past four months. Decentralized exchange trading volumes now constitute 10% of the total market trading volume compared to only 1% during the same period last year, while MetaMask’s user base exceeded one million this year. Driven away by CeFi’s persistent issues with security and regulatory pressure, users are embracing self-custody solutions despite expensive gas fees, network congestion and nascent products. In short, 2020 has been marked by the triumph of an open-source approach to blockchain, with users embracing both the unique risks and rewards of DeFi. 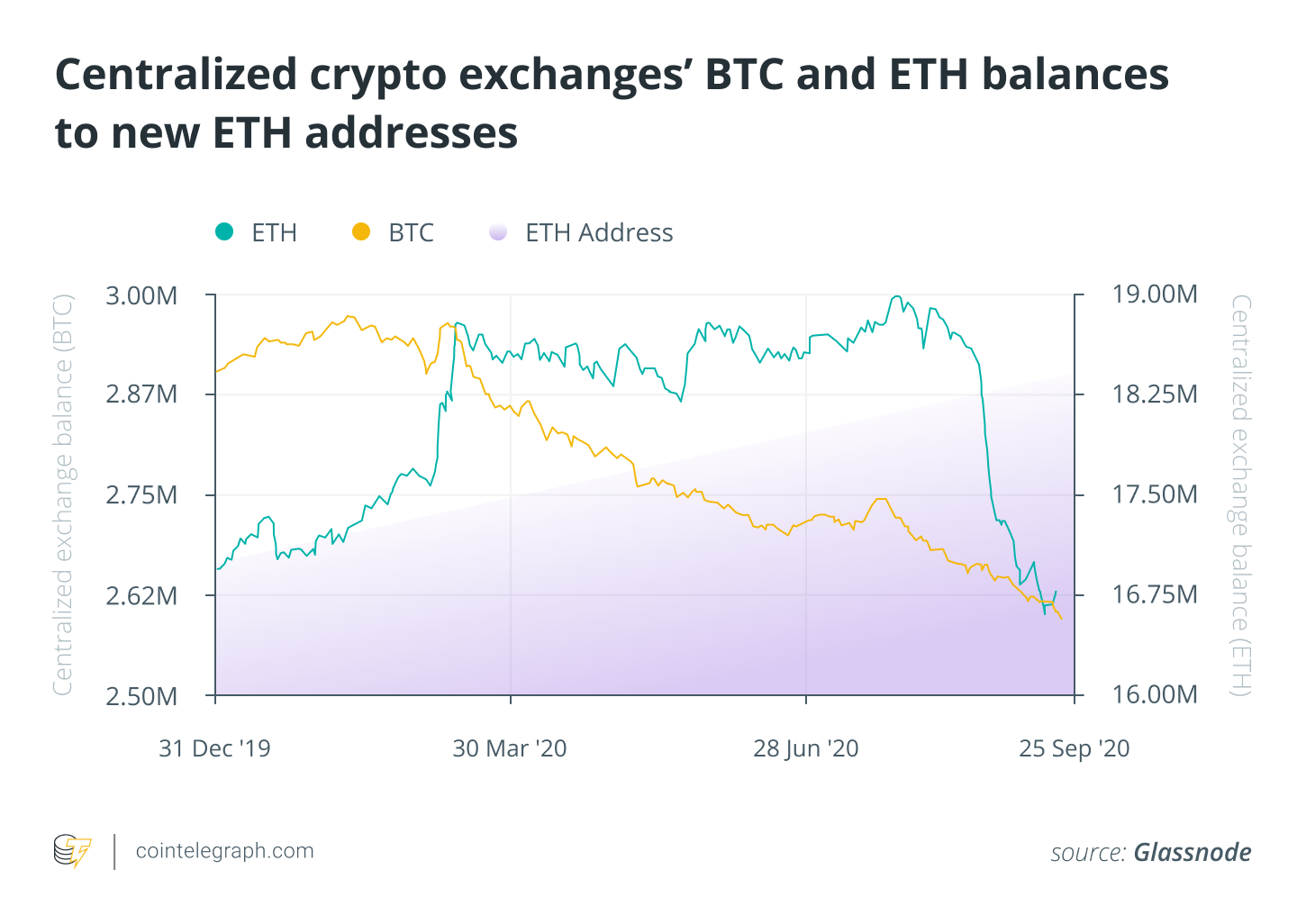 Perhaps one of the most notable shake-ups to occur in 2020 was Ethereum overtaking Bitcoin as the leading DeFi protocol infrastructure and general settlement network. Ethereum is now expected to surpass Bitcoin’s transaction volume for the first time and also become the first blockchain to record over $1 trillion in transactions. Moreover, the Ethereum network’s cumulative fees have surpassed Bitcoin’s this year, signaling the former’s ability to deliver higher returns for users. 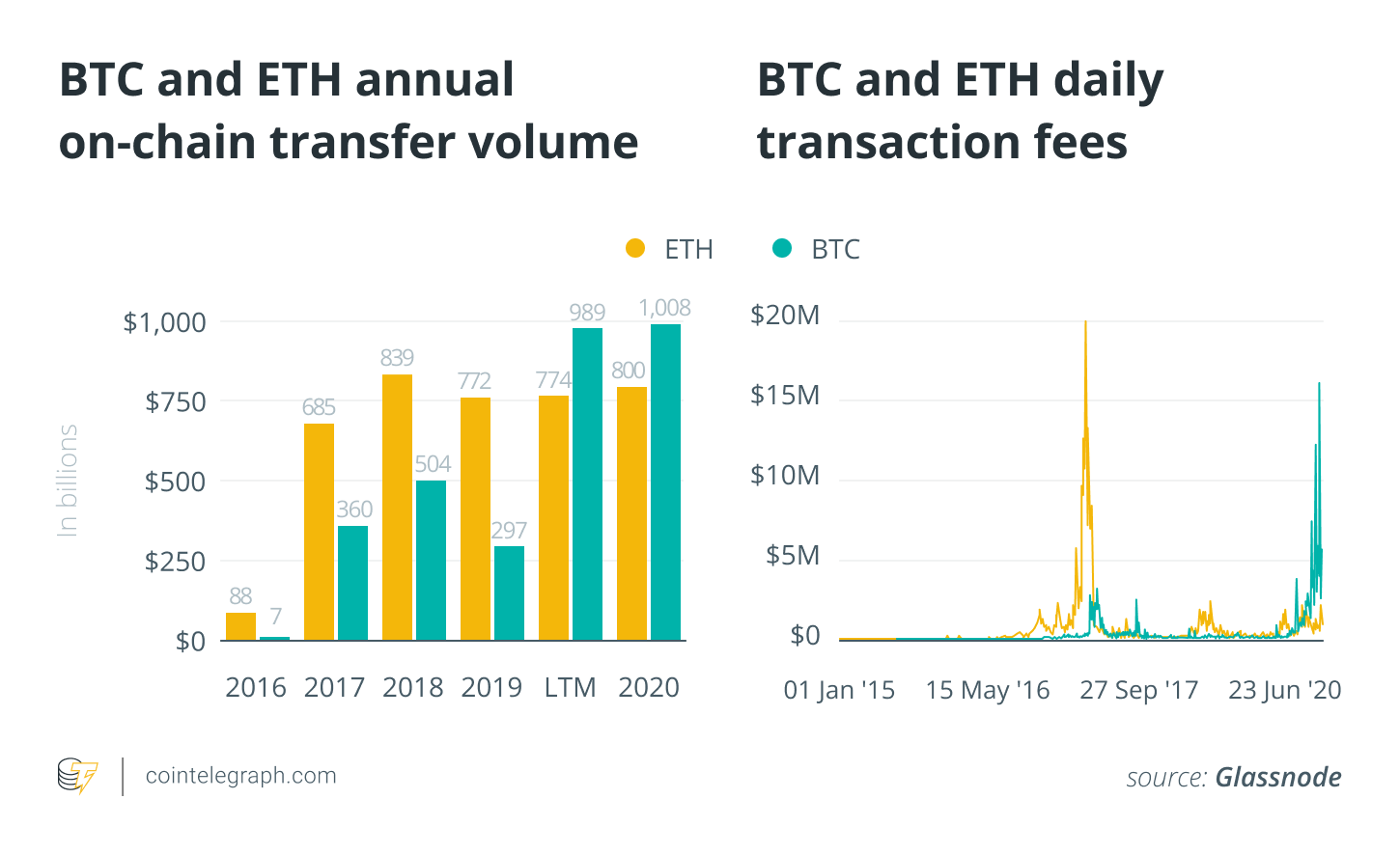 Bitcoin and the rise of DeFi

Bitcoin will face a decrease in on-chain activity as well as a transaction fee insufficiency due to the rise of DeFi. Given that Ethereum has surpassed Bitcoin as a settlement network, there is now a very real possibility that Bitcoin-based transactions may disappear in the future.

In short, Ethereum’s BTC turnover is higher than the vice versa. Moreover, the trading volume of BTC assets on Ethereum has grown exponentially; it is now expected that over 4% of BTC’s total volume will be deposited on the Ethereum ecosystem by next year should this trend hold. 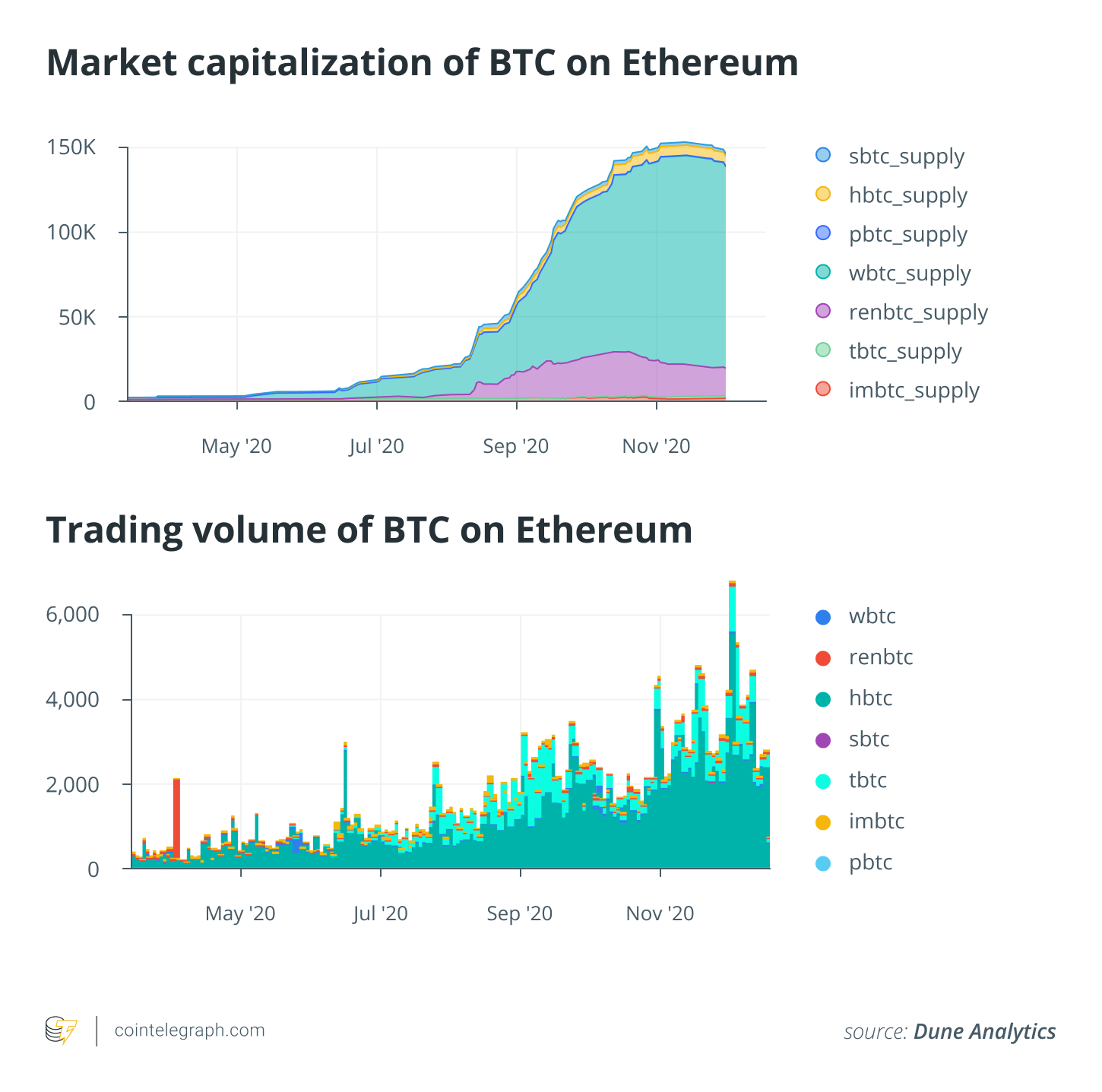 Given the growing number of Ethereum use cases and advances in cross-chain protocols, BTC is now migrating to Ethereum while Ethereum poaches Bitcoin’s on-chain transactions.

Thus, the path forward for Bitcoin is fraught. As Bitcoin continues to halve, miners are increasingly reliant on transaction fees, yet the fees are making up a smaller and smaller share of income as time goes by. Currently, it is estimated that transaction fees only cover 30% of mining costs — an insufficient amount, particularly as halvings continue and block rewards decrease.

Moving forward, the value of mining Bitcoin may drop down to the tens of thousands per hour, an amount that might not be able to support a network that hosts hundreds of billions in assets.

Related: Jumping into the pool: How to earn a profit mining Bitcoin and Ether

I would now like to discuss BTC’s future market size, model and the cost of maintaining the BTC network in conjunction with the phasing-out of block rewards. To begin, I will first note that there is a certain price that goes into maintaining the network’s safety. This price is deducted from miners’ revenue (including block rewards and network fees), which in turn is used to provide the cost of hardware, electricity, operations and labor. This deduction effectively functions as a “tax” that functions similarly to a country’s military and security expenditures. In short, while the amount may fluctuate to a degree depending on environmental factors, it will remain relatively stable in the long term.

Below are two graphs comparing military expenditure as a share of GDP to Bitcoin’s annual network security spending of the BTC market cap. 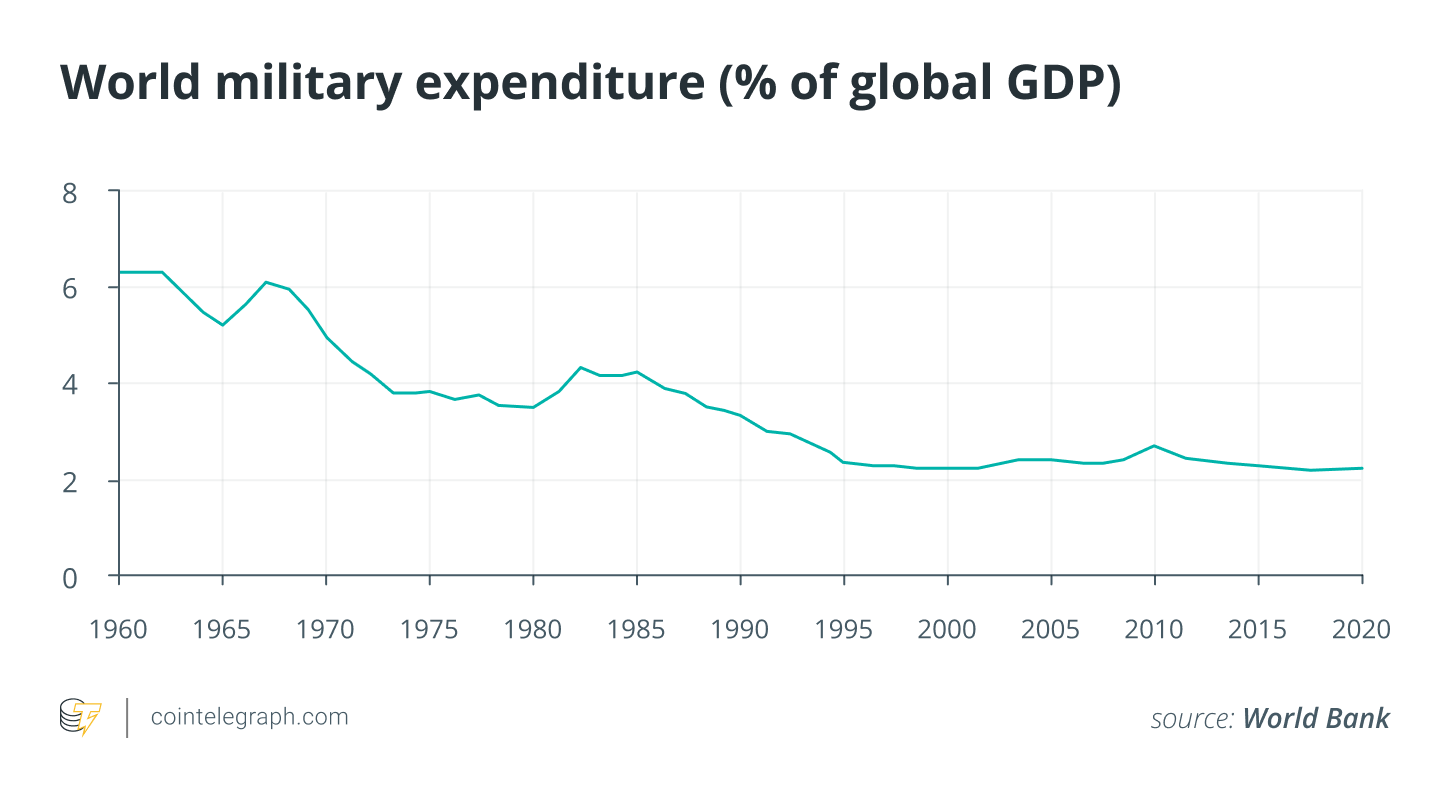 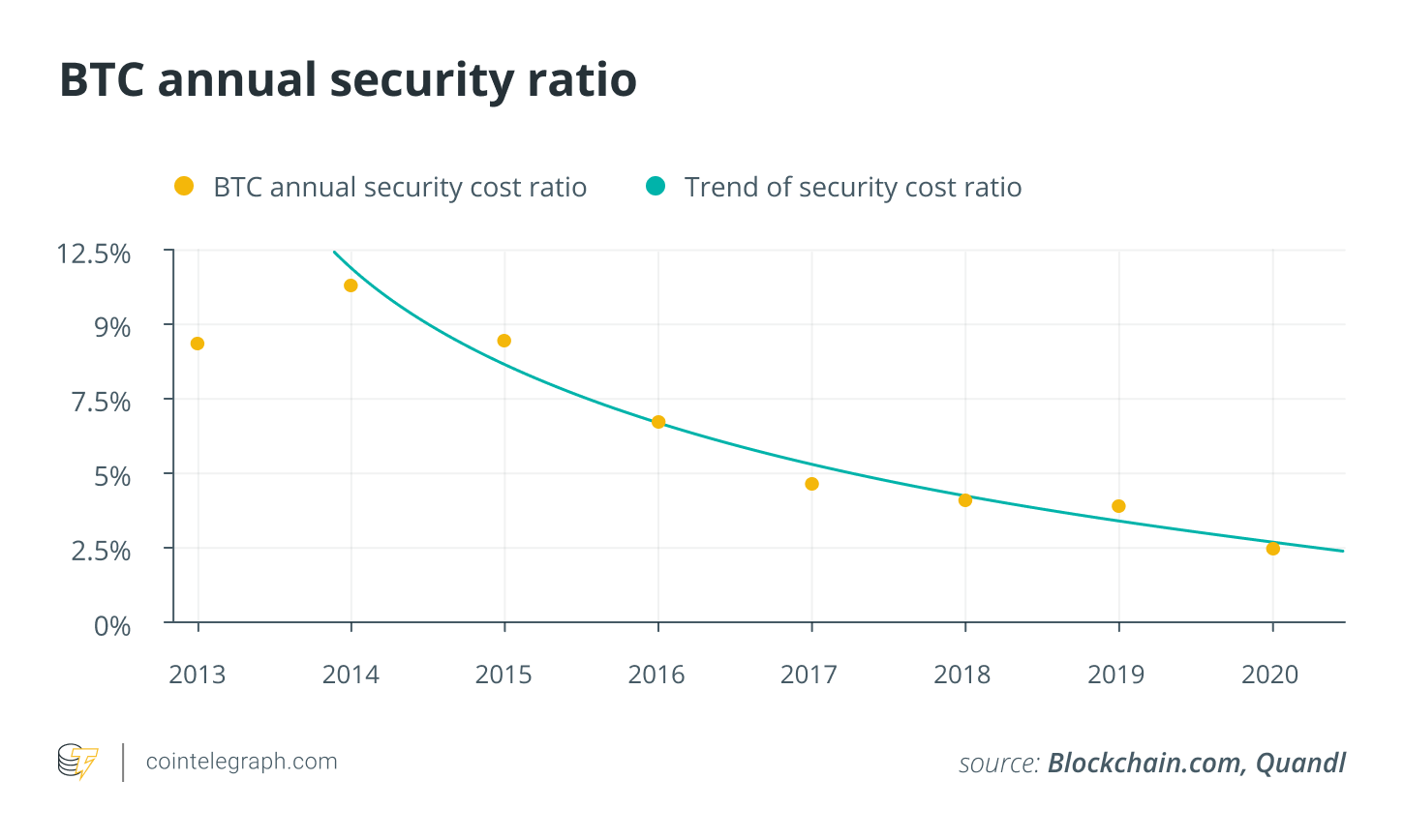 As demonstrated by the graphs, overall global defense expenditure as a part of gross domestic product has stabilized following a sharp decline after the 1960s. Similarly, as BTC’s scope of consensus expands, the amount being invested in network security is also decreasing on an annual basis — a trendline that will eventually test the platform. 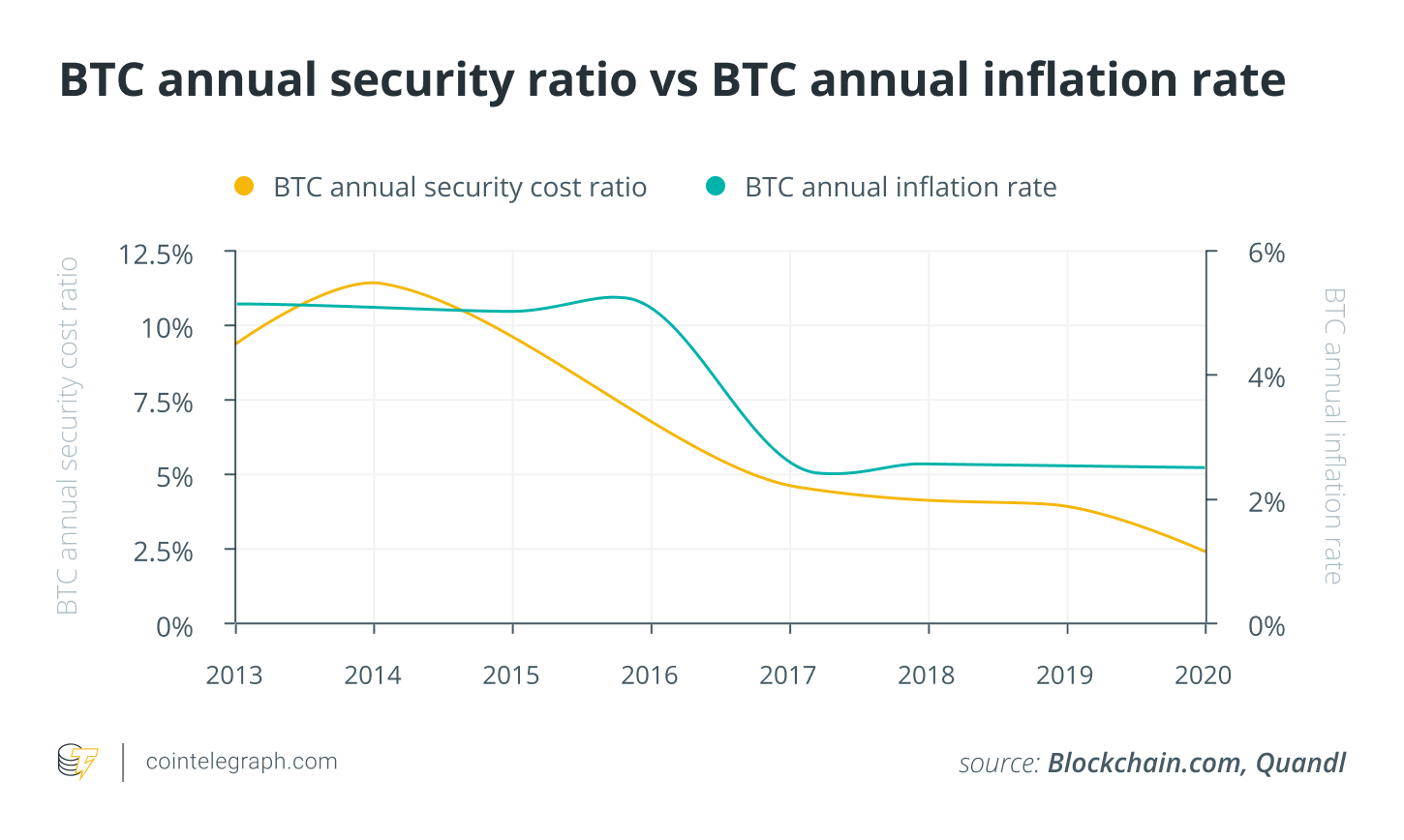 Based on current figures, the “security tax” for BTC in 2020 is 2.42%. Using this as our benchmark, it is also clear that BTC’s security costs are positively correlated with BTC’s annual inflation rate, thus it follows that as BTC’s annual inflation rate falls, so too will security costs. While today’s BTC safety and inflation rate are fairly even, if I factor in future BTC halvings, BTC must be able to maintain an average security tax of 1.37% moving forward to ensure the network’s sustainable growth.

To that end, I must analyze BTC’s future growth rate by examining the annual output of mined BTC and the network value of BTC by using the gold market cap as our reference point. As of 2020, the total market value of gold is approximately $10 trillion, making the current market value of BTC close to 4% of gold. Suppose that in 2040 (that is, when BTC is halved to 0.195 per block), the total value of gold will continue growing at the same rate as GDP (the two are highly correlated, with an average growth rate of 2.18% over the past 20 years), thus reaching $13 trillion in value. 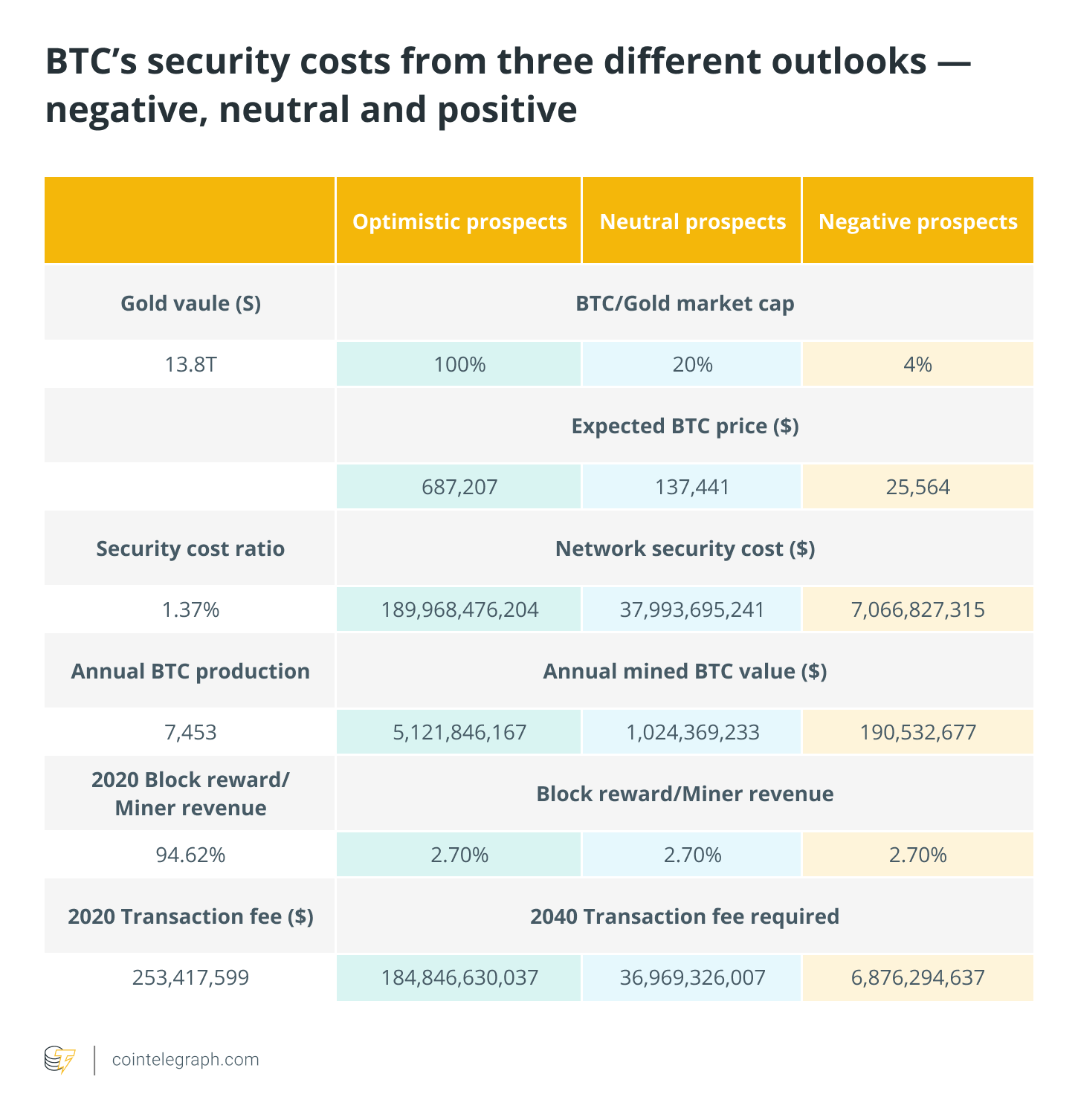 By examining the table, BTC’s security costs to maintain current levels can reach $100 billion under the “optimistic prospects” column in the future. Even in the “negative prospects” column, security costs will still come in at a little under $1 billion. However, with BTC production dropping and block rewards accounting for only 2.7% of miners’ income, BTC will need to primarily rely on on-chain transactions to cover security costs. 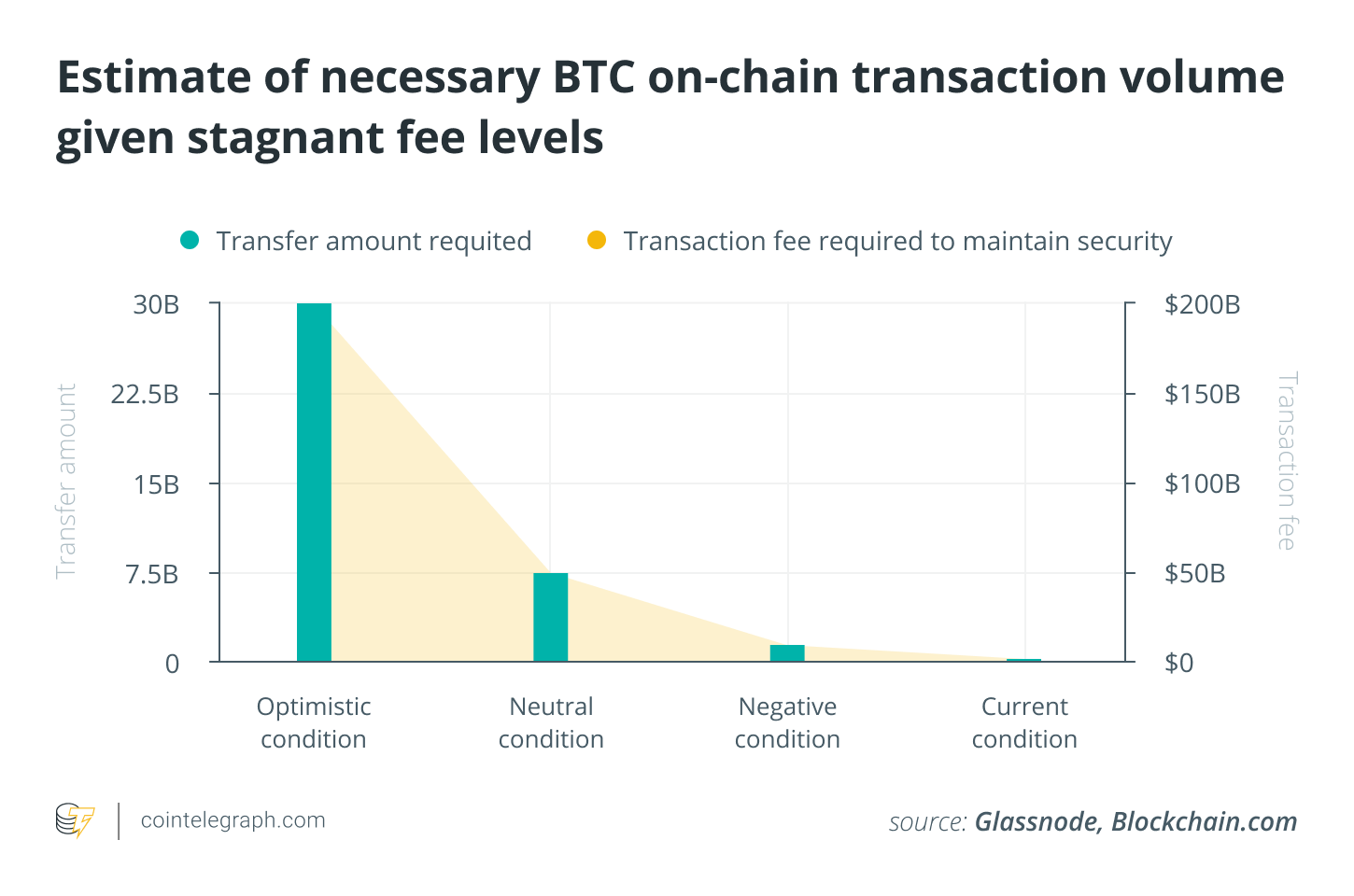 Thus, returning to our original discussion about DeFi’s impact on BTC’s economic model, BTC is currently under heavy pressure to dramatically increase on-chain transactions as long as halvings continue. Based on 2020 on-chain transactions, BTC processed 110 million transactions with an average transaction fee of $5. Moving forward, it is currently expected that BTC will move to increase fees to offset stagnant growth in terms of native transactions. Even based on the most conservative growth predictions, transaction fees must be increased to over $60 (approximately equal to today’s $40), while neutral and optimistic outlooks will require fees exceeding $300 and $1,600, respectively. For ordinary users, this cost is simply too high and will drive more layer-two solutions like Ethereum as users look for alternative transaction systems.

Alternatively, BTC could maintain current fee levels, but then its native transaction volume would need to exceed $1 billion based on conservative estimates. Without factoring in performance, BTC’s on-chain activity needs to be multiplied by 12 times and reach anywhere from $7 billion to 37 billion based on neutral and positive prospects, respectively.

Simply put, BTC is architecturally incapable of keeping up with such growth and volume. Based on BTC’s 1 megabyte block size, the annual transaction volume limit is about 190 million transactions. Moreover, the emergence of more DeFi protocols and asset bridges may result in BTC continuing to migrate elsewhere, thus making BTC’s future path all the more uncertain.

Faced with such a situation, here is Bitcoin’s first path forward, namely vis-a-vis increases of transaction fees. As previously discussed, this move is simply impractical, as it would require multiplying fees by hundreds of times to cover security costs. BTC’s core challenge is not structural, rather it is rooted in its native transaction volume. While miners’ individual incomes may increase, this approach would not solve BTC’s human problem.

The second solution is to upgrade Bitcoin to support smart contracts and establish a native DeFi ecosystem, thereby keeping transactions within the BTC chain. This is not a new topic of discussion — despite Ethereum’s rich DeFi ecosystem, there is growing demand for solutions incorporating Bitcoin. BTC is still the most important asset in the crypto market, with a 60% market share, meaning it already has the user base necessary for a successful DeFi project. Moreover, Bitcoin boasts the most robust network, the most optimal security system and the most extensive consensus system. Finally, through innovations such as scripting languages, side chains or joint mining, Bitcoin could easily support smart contracts and, in turn, DeFi. However, BTC migration is already accelerating despite asset gateways still being in their nascency. While BTC participates in open financial and currency markets, various DeFi projects are now facilitating this migration from the application layer.

Moreover, Bitcoin still lacks the ability to keep up with massive DeFi transaction volumes from a performance perspective. Finally, Bitcoin’s ability to successfully integrate smart contracts into its mainnet remains in heavy doubt. Its current attempts at supporting smart contracts have not risen to the challenge of maintaining the mainnet’s security level without creating a consensus split, while expansion plans that started five years ago have still not panned out. In short, the possibility that Bitcoin will dramatically transform to be compatible with smart contracts is low — it is far more likely that BTC will continue to be circulated in DeFi ecosystems as a passive asset.

The third — and most reasonable solution — is to increase the total supply of BTC. Through DeFi, BTC will depart from Bitcoin in various forms as a value symbol and circulate in other cheap and easy-to-use Bitcoin layer-two solutions. Through this method, BTC can maintain network security while also increasing the total amount of BTC to cover basic network security costs by moving from deflation to moderate inflation. Through this method, BTC will be able to stabilize miners’ income while maintaining more reasonable and less variable transaction fees.

In conclusion, I believe that transaction fees will become the main source of income for BTC miners if DeFi continues to rapidly grow. In turn, this will negatively impact BTC’s network security, with Ethereum overtaking Bitcoin in transaction volume. There are three solutions to take: increasing transaction fees, supporting DeFi or increasing the amount of BTC in circulation and adopting a moderate inflation plan.

This article does not contain investment advice or recommendations. Every investment and trading move involves risk, and readers should conduct their own research when making a decision.

The views, thoughts and opinions expressed here are the author’s alone and do not necessarily reflect or represent the views and opinions of Cointelegraph.