In the past week, a large number of altcoins have broken from their sideways ranges to post double-digit gains and it appears that investors are interpreting the current trend as a new ‘altcoin season’.

As historical data shows, these altcoin breakouts typically occur after Bitcoin (BTC) enters a consolidation phase after a sharp rally similar to the one the maket has witnessed over the past three weeks.

For many of the recent top movers, technical analysis traders are simply capitalizing on tokens that show bullish market structure or are on the verge of a breakout due to increased volumes, but there are also coins that are moving higher based off a number of fundamental factors.

THORChain (RUNE) is one of the tokens which is being driven by more than investor FOMO and the digital asset was also one of the top moving altcoins in 2020.

The THORChain project was founded in 2018 and aimied to build an independent blockchain that could facilitate cross-chain transfers. The project currently focuses exclusively on Binance Chain BEP2 tokens, which somewhat contradicts its chain agnostic aspirations but there is the possibilty that additional chains could be added in the future.

Currently, THORChain’s native RUNE token is given to traders that provide liquidity to the platform and holders can also benefit from the staking pool. The liquidity pools are incentivized and managed similarly to Uniswap, although they are 50% composed of RUNE tokens.

In the past two weeks RUNE token rallied by 95% and while there is not a timeline set for the mainnet launch, it’s expected to be based on the Cosmos blockchain.

Since Aug. 2020, the BEPSwap DEX has been running on a beta version and the team issues regular detailed weekly reports on how the THORchain ecosystem development is progressing.

Another recent positive development came on Dec. 31 when Haven Protocol tweeted that their integration with THORchain would be completed within three months. The post also stated that staking would be possible by adding HXV and xUSD to Haven Protocol’s liquidity pools.

A few hurdles lie ahead

In the past week, THORChain reached a new milestone as the platform processed 10 million transactions in 3 months but a number of analysts have severely criticized the project for the relatively small number of nodes.

According to data from Delphi Digital, there are currently 67 nodes and these are mainly run by AWS or Digital Ocean. This issue can be partially explained by the large amount of RUNE required to be staked in order to become a validator. 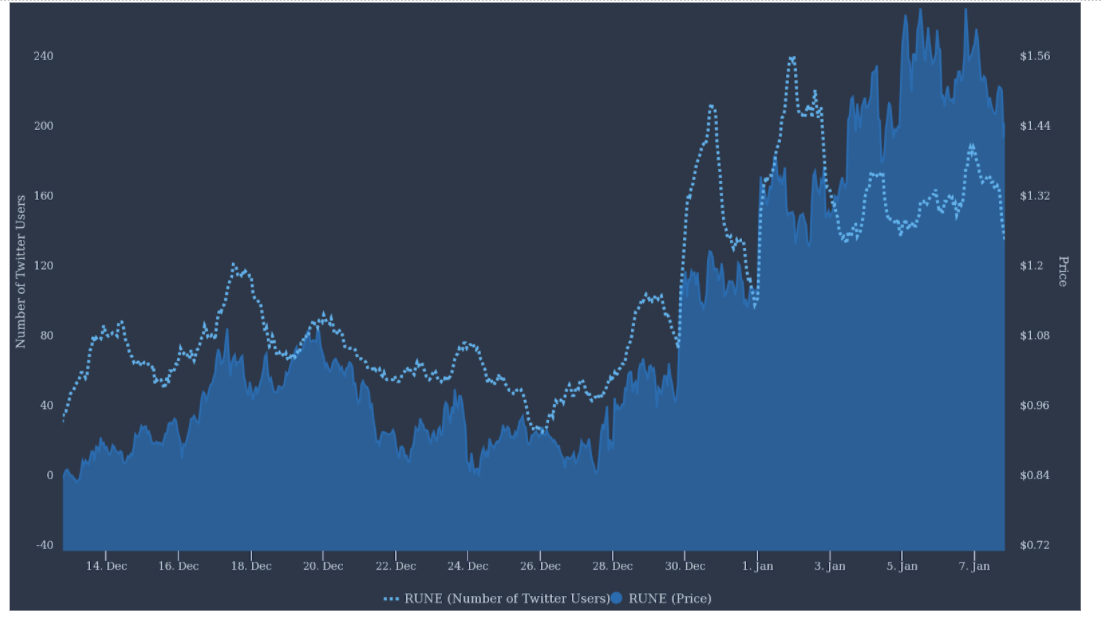 Data from TheTie also shows that price spikes have been accompanied by increases and decreases in social network activity. This effect corresponds with development activity and partnership announcements, as that news tends to be shared and positively commented on by its growing community.

Currenlty the project is held in high regard by it’s community and altcoin investors but it’s future success may hinge on the team's ability to deliver its promises.

The views and opinions expressed here are solely those of the author and do not necessarily reflect the views of Cointelegraph. Every investment and trading move involves risk. You should conduct your own research when making a decision.