The co-founder of crypto data aggregator Markets Science, Twitter user “Bitdealer,” has shared a chart  indicating negative correlations between 11 top DeFi tokens and Bitcoin (BTC) over the past 45 days up to Nov. 1, with AAVE showing neutral correlation and UNI showing confluence of less than 0.1.

Seven of 13 DeFi tokens were also found to have negative correlations with Ethereum (ETH), despite Ethereum powering much of the DeFi ecosystem.

With many decentralized finance tokens struggling while Bitcoin surged in price this week, analysts have identified a longer negative correlation between DeFi tokens and BTC.

However, the sector found its speculative plateau by the end of August, with Binance’s DeFi Composite Index crashing 64% from $1,100 at the start of September to less than $400 as at the time of writing.

TokenSet’s DeFi Pulse Index (DPI) has also shed more than half its value since launching at $130 in mid-September. DPI tokens last traded hands for just $61.55.

Meanwhile, Bitcoin’s price has increased by more than a third in the past month, rallying to tag $14,000 at the end of October after global payments giant PayPal announced it was entering the crypto sector.

Google payments engineer Tyler Reynolds believes the bullish action in the Bitcoin markets is drawing speculative capital away from DeFi, noting that “major DeFi players” including Three Arrows Capital and Qiao Wang have recently pushed “a narrative of a hard rotation into BTC.” Reynolds estimates up to $50 million may have left the DeFi market, weakening buy-side pressure in the markets.

Crypto trader “Flood” made a similar point on the Coinist Podcast, saying that he didn’t have “as much exposure as [he] would’ve liked on this move up,” and that he thinks of this as “a representation of the market as a whole”

Trade activity on decentralized exchanges also appears to have reversed, with monthly DEX volume falling from close to $26.3 billion in September to roughly $19.4 billion last month.

Only a handful of DEXs have a significant share of the sector’s volume, with Uniswap and Curve representing 75% of decentralized trade in September. The past three months’ worth of Uniswap volume equates 45% of the total DEX volume since November 2019. 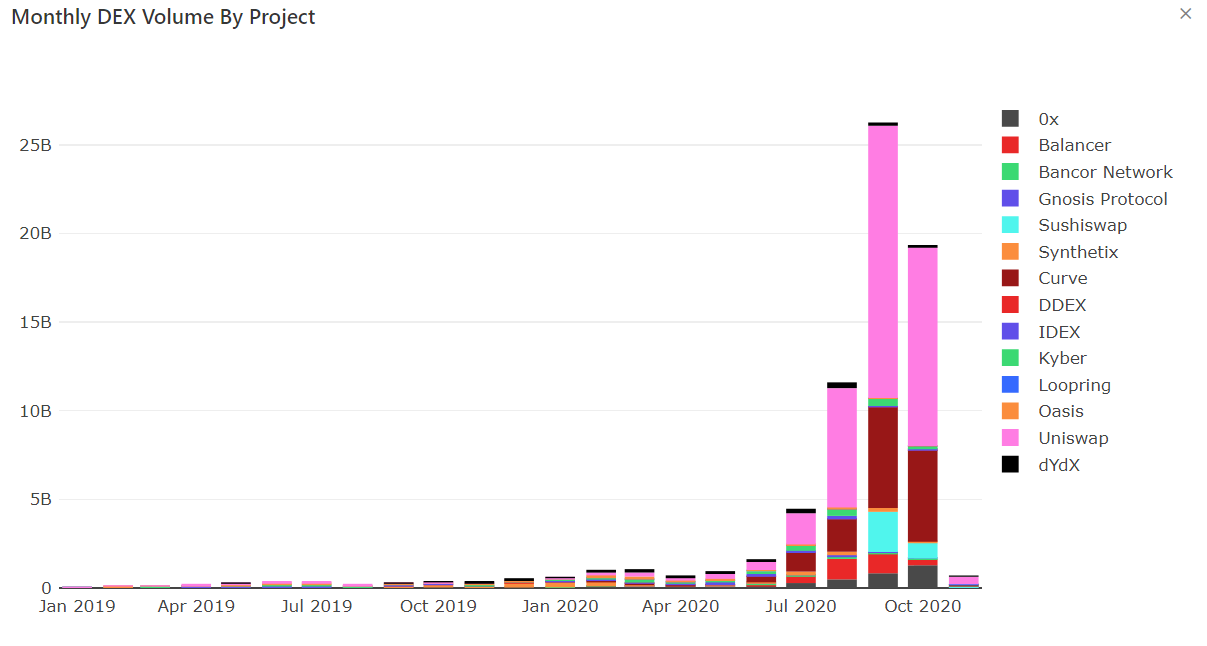